Happy holidays! It's that time of year, where love, goodwill, book releases, and after Christmas specials are in the air.

I'm officially putting my boys aside until the end of 2017 when I release the next generation of Death Dwellers. I know you've heard this before. It's the truth this time. Unfortunately, it's time for me to move on. Interest in the series has waned ::sniffle, sniffle:: I've thought of sharing parties and email campaigns, a laundry list of ways to introduce Christopher and company to more people. Paid advertising would work. For instance, to get more exposure via Facebook, I'd have to pay for the ads and my pocketbook is telling me hell to the no. News of the releases no longer automatically show up on feeds. This stopped a long time ago, but I'm feeling it keenly now as I tell my boys goodbye. Besides, I don't want to beat a dying horse and anger my fans. I have to spread my wings and try other things. This has been a hard and painful decision for me because I'm sure I could think of a couple of other stories for the Death Dwellers (or their friends...Dr. Will and Cameron from Mistrust, for instance). We all also know Christopher is always up to something. As Outlaw and his boys are retired, I wanted to honor them by making the complete series available in one awesome set. It's huge, with over a million words. If you know someone who likes MC romances and you like the Death Dwellers, please give a shout out for Christopher, John Boy, Val, Mortician, Digger, Cash, Stretch, and their lovely ladies.

I couldn't end the series without telling the story of Mortician's mother-in-law, Roxy. In Mistrust, she finds herself being a cougar when Outlaw puts her on the case to discover the real reason that a new legal hire suddenly appeared. To Outlaw, Knox Harrington is suspect and is sending his alarm bells into overdrive. At 44, Roxy believes her chance at love has passed, so when sparks fly between her and 34-year-old Knox, she'd blindsided.

Finally, there's Outlaw's dictionary, a book where a lot of his sayings are contained in this single volume.

Thank you so much for all the love and support you've shown to me and my boys over the years. I hope you have a happy, healthy, and wonderful 2017. 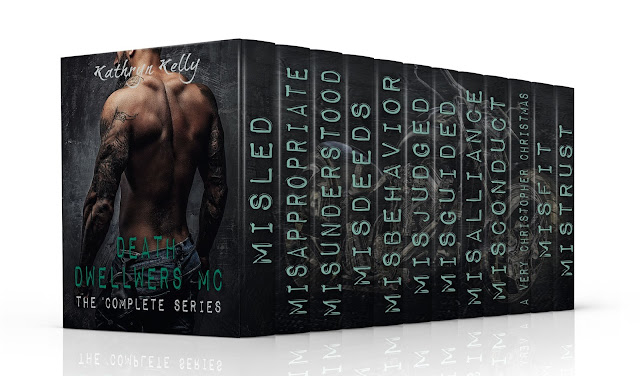 Join Christopher “Outlaw” Caldwell, the men he calls brothers, and the women they love in tales of betrayal, hate, vengeance, and enduring love.
Misled – The newly installed club president falls for the daughter of the man he killed.
Misappropriate – The past resurfaces and threatens Outlaw’s future.
Misunderstood – A ghost from the past returns to haunt the club’s vice president.
Misdeeds – John Boy must choose the woman he loves or the club he’s pledged his allegiance to.
Misbehavior – The road captain has to face his demons before he loses the only woman he’s ever loved.
Misjudged – Tragedy has struck, leaving Outlaw to pick up the pieces.
Misguided – The club enforcer must choose between the bet he made and the love of his life.
Misalliance – John Boy faces a future alone.
Misconduct – The club’s sergeant-at-arms must convince Outlaw he didn’t betray him.
A Very Christopher Christmas – Outlaw wants a quiet holiday season.
Misfit – The club’s treasurer and explosive’s technician hide their relationship with Outlaw’s sister.
Mistrust – Club “mother”, Roxy, must help the club outwit a man Outlaw believes to be a cop. 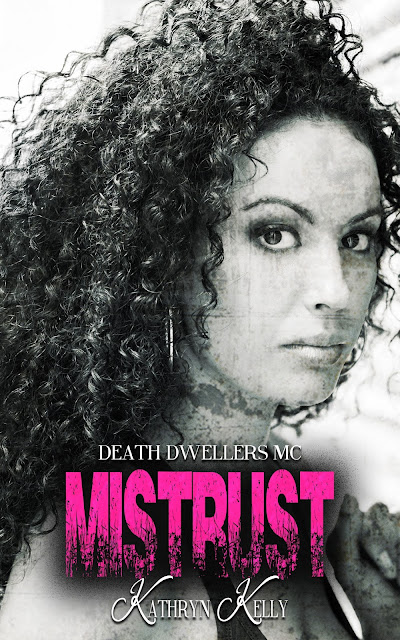 When Roxy Doucette meets the all too handsome, Knox Harrington, sparks fly. He's the new assistant to the club's attorney. However, Christopher "Outlaw" Caldwell, the club's president, is suspicious of Knox's true reasons for being there. Something about Knox just rubs Outlaw the wrong way, therefore, he asks Roxy to get Knox into bed for some "pillow talk". At first, she's outraged at Outlaw's proposal, but accepts that he might be right and the club could be in jeopardy. She agrees to "date" Knox and the war of wills begin.
Born in wealth and privilege, Knox Harrington is a former police officer who has little regard for biker clubs. In particular the Death Dwellers, and ESPECIALLY the president. Now a private investigator, Knox is working on behalf of his uncle to bring Outlaw and the Dwellers down. The club members' nefarious deeds warrant their destruction. Knox intends to achieve that by any means possible.
When he meets the beautiful, formidable Roxy, there's instant attraction between them. However, he sees an opportunity to use her to ferret information about the club. He's over-the-top-arrogant, believing the ignorance and stupidity of Outlaw will ultimately be the club's downfall. Knox hasn't a clue that Roxy is on to him. She's also attracted to him.
Aside from the safety of the club, Roxy's in it for the benefits. She has a new lease on life after surviving cancer. Besides Knox's low-down behavior, she's a 44-year-old, mother of four children and Knox is ten years younger than she is. However, she can't resist the challenge when Knox lets it be known that he's the sharpest tool in the shed. He sure the hell is a tool. The foolish kind and Roxy is determined to teach him a lesson or two.
Let the games begin. 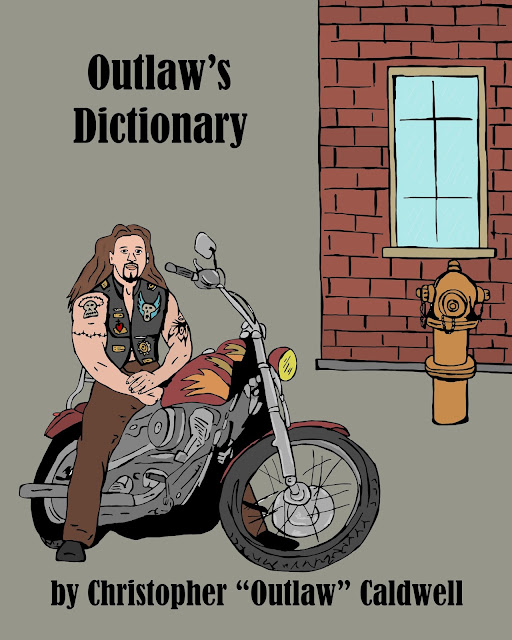 Christopher had to say goodbye in his own unique way, with an illustrated book filled with his favorite sayings and in alphabetical order. 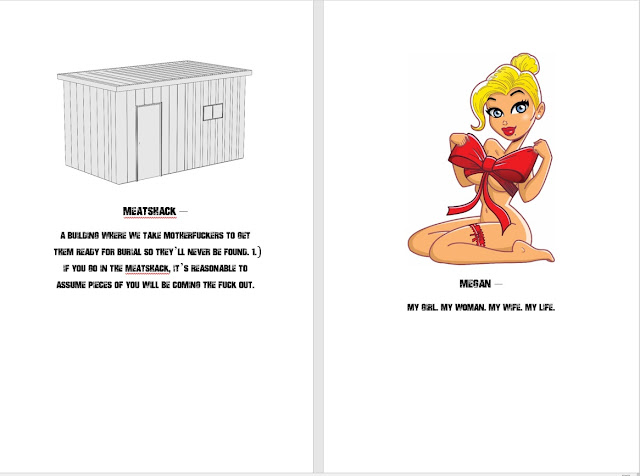 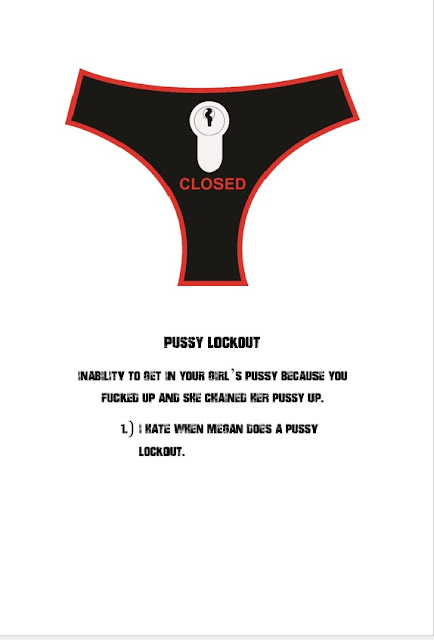 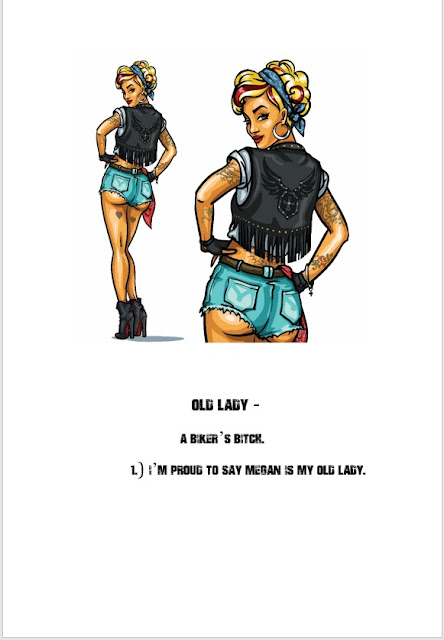 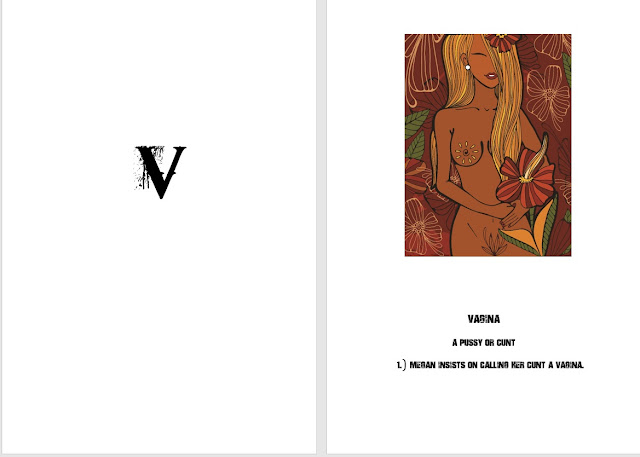 Posted by Katkelwriter at 11:13 AM No comments: 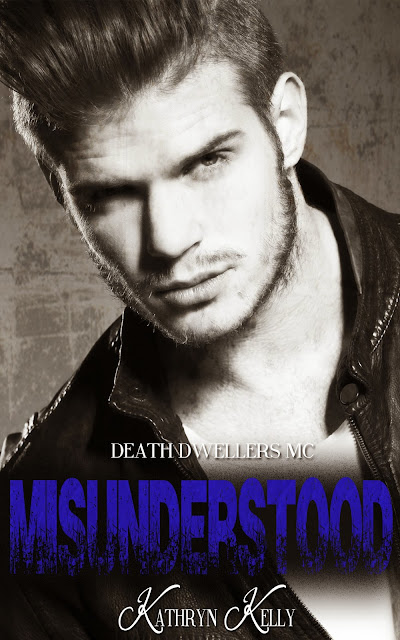 
THIS IS THE END OF THE ORIGINAL PLOT FOR MISUNDERSTOOD. IT WAS AT THIS POINT THAT I DECIDED TO REWRITE THE BOOK.
Posted by Katkelwriter at 4:00 PM No comments:

Revenge is like hatred. At some point, both destroyed the carriers rather than the targets. Hatred poisoned thoughts and dried up hearts until nothing but a shell remained. The quest for revenge swept everyone into a vicious vortex and destroyed each life involved.
As it happened in Kendall’s case. She’d wanted to make amends for all the years she’d spent hating herself and her life. Most of all, she wanted to make amends to her sister, posthumously, wanted Ellen to accept her once and for all. Too late, she realized, she’d sought out revenge against Megan because she’d always craved acceptance from her sister and approval from her mother. 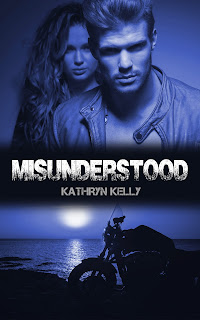 Now, her life was over. She’d ruined her relationship with Johnnie, the only man she’d ever had real feelings for. And, chances were high, she’d destroyed Megan’s and Outlaw’s marriage. Having no place to go, she was hiding out in the cave Johnnie had taken her to to surprise her. That seemed like a lifetime ago. Had it really only been six days?
It surprised her no one had come searching here for her. Before her phone had died, she’d gotten some very ominous texts from Outlaw. Nothing from Johnnie, though. Not a word. He was well and truly down with her. He’d slept with his Megs and, by Kendall’s own doing, drove the two of them together.
She wrapped the blanket tighter around her and sniffled, tears rolling down her cheeks. Not only did she fear for her life, but she couldn’t face them. For once, she was truly ashamed of herself and all the havoc she’d caused. And for what?
She laughed through her tears, not even having the energy to feel bitter. Or hate. Not anymore. She felt nothing. For Ellen or herself or her mother. They’d all gotten what they deserved.
Movement caught her attention and she wrapped her arms around her legs, trembling. Whatever it was, she hoped it went straight and not veer in her direction. She picked up more sound, now recognizing them as footsteps, growing closer with each breath she took. A moment later, a flashlight beamed in her face and she blinked, whoever holding the light swallowed by the darkness.
“Kendall.”
A shiver went through her a Johnnie’s cold, implacable tone. He didn’t wait for her to respond. He reached her and dragged her to her feet, shoving her forward.
“Please.” Her voice trembled. “I can explain.”
“You could. If I gave a fuck about hearing what you have to say. I don’t. Now, walk.”
“Johnnie—“
A gun cocked. “Go, Kendall. Now,” he gritted. “Before I lose it and do something I’ll regret for the rest of my life.”
Kendall bit down on her lip, but a sob escaped her. “Wh-where am I g-going?”
“You’re smart,” he sneered. “You fucking figure it out.”
Another sob she couldn’t hold back. He was bringing her to the clubhouse. To Outlaw. And she knew nothing she’d say would discourage him from following through with those plans. 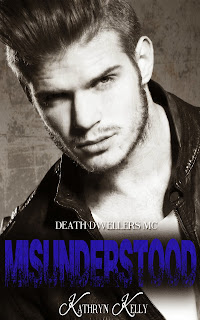 Whatever else he intended to do, Outlaw hesitated, instead holding out his hand to Johnnie. Johnnie drew in a deep breath, the pain in his eyes cutting through Kendall. He shrugged out of his cut. Outlaw snatched it from him, ripped off his patches, then threw the leather onto the ground, purposely stepping on it. With a last evil glare to Kendall, he walked to Megan, grabbed her hand, and led her out of the room.
“We gotta escort you off the property, John Boy,” Val said quietly.
“You have ten minutes to get your shit,” Mortician added.
Johnnie nodded. He stared at Kendall. “See you around, gorgeous,” he said and sauntered out of the room, leaving her more alone than she ever been in her entire life.

I couldn’t be no hypocrite and take John Boy’s life when the Big Man saved my fuckin’ ass. You a good girl and you make me think. I know you couldna lived with yourself if I fucked up this motherfucker. You know? Cut his dick off and fed it to the dogs.” He grasped her neck and brought her closer, nipping at her lip. “You belong to me.”


“Yes,” she whispered. “I belong to you.” And no one could doubt the sincerity of her words, not when he love was shining in her eyes. “I love you so much, Christopher. And I’m so sorry for everything.”

TO BE CONTINUED TOMORROW
Posted by Katkelwriter at 4:00 PM 3 comments: